Archaeology and the Science of Complex Systems
Much of my current research uses a complex systems approach to address anthropological and archaeological questions.  If your first thought is "what's a complex systems approach?" you're not alone.  While complex systems science is no longer a "new" or particularly novel approach in many discipline, it remains unfamiliar territory for many archaeologists and anthropologists.  This is unfortunate.  It is also more than a little ironic considering the basic nature of many of the questions that anthropologists ask and the nature of the empirical evidence that we must use to address those questions.

This is doubly true for archaeology, which is essentially a science of explaining phenomena we can never observe.  Is this difficult?
Yes.  Yes it is. Would archaeology benefit from having a few more tricks in its arsenal?  Yes.  Yes it would. Is complexity science one of those?  Yes. Yes it is.

I have three goals in this section: 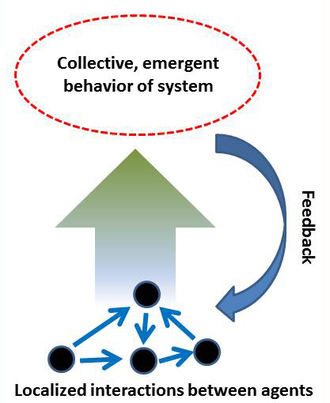 Believe it or not, there is no single definition of what constitutes a "complex system."  Part of the reason is that "complex systems science" is an umbrella that can be applied to research in many fields: physics, chemistry, biology, economics, sociology, and anthropology.  What ties it all together is a fundamental concern with how the relationships and interactions between the constituent parts of a system give rise to the collective behavior of the system.

Spoiler alert: complex systems behave in ways that are unpredictable and nonlinear, and therefore often difficult to understand intuitively.  The behavior of complex systems emerges "from the bottom" up as a result of the interactions among the parts of the system (whether those parts are hunter-gatherers, ants, atoms, birds, stock brokers, whatever).  The behaviors and interactions of the parts of the system are, in turn, influenced "from the top down" by system-level conditions and behaviors.  These relationships between the micro and macro levels of the system are difficult to understand, making complex systems resistant to both mathematics and armchair theorizing.  You can't just write an equation that solves for the behavior, and you can't just sit down with a pencil and paper and bowl of potato chips and figure out what the system is going to do.  Complex systems just don't work that way. That's what makes them complex.

Back to how we define a complex system.  Most definitions share a couple of key elements:
These elements of a definition are a good start, in some ways, all you need:  complex systems can be recognized by a combination of how they are structured (with many interacting parts) and how they behave (emergent behavior).  Complex systems are not difficult to identify - they are everywhere.  Human social systems are undoubtedly complex systems. So are ant colonies.  And flocks of birds.  And schools of fish.  And the weather.  And ecosystems. And immune systems.  And galaxies.

The details of these systems are different:  their constituent parts (fish, ants, people, water droplets, planets, etc.) are not the same.  Yet there are striking regularities in the patterns of behaviors that these systems exhibit.  This suggests commonalities in where those behaviors come from - perhaps the details of the system don't matter as much as the interactions between the parts.  Ever wonder what schools of fish and flocks of birds have in common?  Where do those patterns come from?  Can we identify a common process or set of behaviors that explains both?  Does that explanation apply to the behaviors of other systems with similar behaviors?  How do we know when we've figured it out?  Those are questions for complexity science.
The Tyranny of the Ethnographic Record?  The Tyranny of the Archaeological Record?

Archaeology is tricky.  We are ultimately attempting to study things that we can never observe.  Yes, we do plenty of measuring, weighing, describing, gluing, drawing, labeling, mapping, and excavating of things that we can observe: rocks, pots, features, etc.  We are studying those material things, however, as a path to addressing larger questions about peoples, cultures, societies, and behaviors that we cannot (and never will be able to) see.  At least I am. And this is my web site, so that's what we're going with. If you want to make an argument that archaeology actually is something if it is not anthropology, be my guest.  But you'll have to do it on your own web page.

The nature of what we are studying means that archaeology fundamentally has to be a theoretical rather than experimental science.  Just as we cannot simply observe firsthand how primary states formed, or how culture and biology articulated in human evolution, or how hunter-gatherer systems adjusted to long-term environmental change, or how human societies colonized empty landscapes, we cannot set up a controlled, real world experiment designed to determine cause and effect.  Of course we can (and do) collect a lot of firsthand ethnographic information that helps us understand how people in the present live their lives and make decisions and how societies in the present are put together.  But we cannot watch long-term processes of change unfold among living societies and we cannot perform an experiment to determine under what conditions a primary state will form.  We are dependent upon building theory (explanations that contain generalized principles) and models (descriptions of how variables fit together) so understand what happened in the past.

There are two main kinds of empirical information that we can use to understand the past: ethnographic data and archaeological data.  Neither, unfortunately, is satisfactory on its own.  Ethnographic data, while potentially very rich, provide only a very narrow time-space window into human behavior.  Archaeological data can be expansive in terms of time and space, but are just the material residues of what we actually want to understand (i.e., the footprints of the animal instead of the animal itself).  This is a mismatch in scale.  These two kinds of information are not telling us the same things, and cannot easily be translated back and forth.

Operational processes operate on human time scales - days, weeks, years, lifetimes.  Do we move camp or not move camp? Should we have another child?  Which resources do we expend effort to procure?  How much food should we store for the lean season? Do we move the family to a different group or do we stay with this one?  How do we choose where to go next?  Operational processes are associated with short scales of time and space as a result of behaviors and decisions made by individuals and families based on their limited knowledge, goals, and connection to society.

Ethnography can tell us a lot about operational processes but very little about evolutionary processes.  Archaeological data give us insight into sequences of evolutionary change, but rarely have the resolution to get at operational scales.  Alone, neither is sufficient for understanding the past.  How do we make use of both in a way that gives us a chance to construct explanations in which we can have some degree of confidence?

One simple way to combine archaeology and ethnography is to create a quasi-longitudinal  “line-up” of ethnographic cases that are meant to represent a developmental sequence.  We know that there is some value in doing this.  This can be helpful in identifying constraints (complex hunter-gatherer systems do not occur under conditions of low population pressure, for example – Keeley 1988) and broad trends and inter-relationships.  Indeed, the non-random co-occurrence of constellations of attributes in the ethnographic and ethnohistorical records is what lets us identify and classify system “types” such as tribes, chiefdoms, states.  Most complex hunter-gatherers have higher population densities, are more sedentary, used stored foods, have more complicated technologies and fancier status markers, etc.  This lets us identify different systems, put them in an order, and ask the question “what is new in this state that was not here before?  Why did it arise?”  This is one avenue towards model-building.  It is not a great one, however.

Use of the ethnographic record in this way presents several problems:
Another way is to use ethnographic societies as analogies for archaeological ones.  Without going into detail about why, I will just state for now that this is a bad idea.

There is another way.
Applications of Complex Systems Science to Archaeology: A Few Thoughts

Complex systems science can contribute to archaeology in several ways.  As mentioned above, complexity science is a broad approach that encompasses many different ways of understanding natural and cultural phenomena.  I am by no means an expert in all of them (or even one of them).  I was initially attracted to complexity science as a tool for doing archaeology because of the many ways I saw that it could be used to address issues central to understanding hunter-gatherers.  It was central to my dissertation work, which integrated ethnographic data, computational modeling, and archaeological data to understand the social networks of early hunter-gatherers in the American Midwest.

In my opinion, a general failure to demonstrate how the results of model-based analysis can be directly compared to archaeological data (the empirical data about the past) underlies some of the skepticism and suspicion of applying complexity science to archaeology.  I tried to make those comparisons in my dissertation as well as in my JAA paper and a recent paper in AJPA.  Archaeological data (or fossil data, as the case may be) are the direct evidence of the past.  For an explanation to be satisfactory, it has to accommodate that evidence.

These are just a few thoughts, to be better organized and presented in the future.

Through systematic experimentation with an ABM, cause-effect relationships between human-level behaviors and emergent, system-level phenomena can be investigated as an empirical problem rather than simply assumed. That is something that cannot be accomplished with archaeological data or ethnographic data alone.  This kind of work, according to Robert Axelrod, is part of what makes complexity science a “third way” of doing science, positioned between experiment and theory.  It is a new way of doing archaeology, and it can do things that other avenues of analysis and model-building simply cannot.  It is our new kung fu - an incredibly useful set of tools that we can use to address a host of issues in archaeology and anthropology in new way.
The Authority Card

Finally, I’m going to play the authority card again.  If you don’t believe that this approach is useful for generating scientific insights about the world around us, ask Murray Gell-Mann, Kenneth Arrow, Martin Karplus, Thomas Schelling, and Ilya Prigogine.  The alert will note two commonalities among the individuals in this group.  First, they have all been involved in the development and use of complexity science. Second, they have all won Nobel Prizes.  That's not bad company to be in when you're looking for ways to push the boundaries of what we know and what we can know.