One of my favorite quotes from Lewis Binford is from his 1990 paper titled "Mobility, Housing, and Environment" (Journal of Anthropological Research 46(2): 139):

"Correlations are not necessarily causally indicative; they are clues to the operation of systemic phenomena in the world. They are what needs explanation-they are not explanations in and of themselves."

This quote touches on why I am interested in the phenomenon of "ancient giants," especially those reported from the Eastern Woodlands.  There are hundreds of accounts of "giant" skeletons being disinterred in eastern North America during the late 19th and early 20th centuries.  Most of these accounts were printed in newspapers and there are many striking similarities in how these remains were described.  The quantity and obvious patterning in these accounts are being presented as evidence of their essential accuracy in a 21st century renaissance of the "ancient giants" phenomenon. This renaissance is tied into, among other things, religious fundamentalism (the idea that the existence of giants would prove the Bible to be literally "true" while demonstrating evolutionary theory to be "false"), a re-emergence of the Mound Builder Myth, anti-government conspiracy theories, and the paranormal.

Modern giant enthusiasts are very fond of collecting newspaper clippings and asserting that they can't all possible be wrong.  They are correct that many accounts exist and there are patterned similarities among them.  In my opinion, those patterns are "clues to the operation of systemic phenomena in the world."  We have a historic phenomenon that has spatial and temporal dimensions and utilizes a common vocabulary: there is something going on here, and the "giant phenomenon" deserves an explanation and an interpretation.  What the giant enthusiasts are missing in simply asserting that the accounts exist therefore giants existed, however, is any appreciation for the historical, political, cultural, and scientific contexts of those original accounts.  I am interested in supplying that, and showing that a thoughtful, evidence-based analysis of the information can be done using many of the same sources that the modern giantologists rely on. 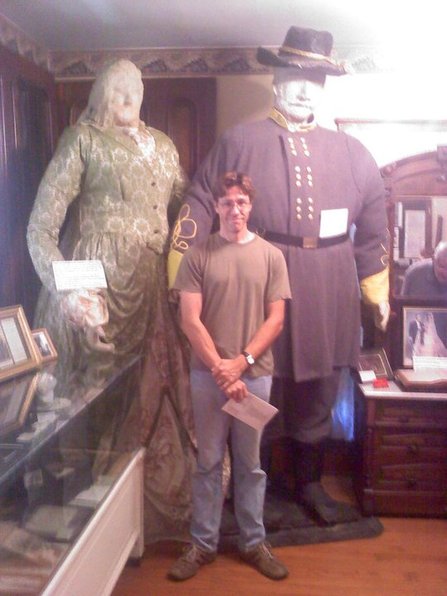 A picture of me with mannequins of Martin and Anna Bates in the museum in Seville, Ohio. I'm the one in the middle.
I find this a fascinating topic because of the complex interplay between history, culture, language, politics, and science that provide the contexts for both the "original" giants phenomenon and it's current renaissance. Although I have been interested in the "giants" phenomenon for some time, I have only recently begun to seriously address it.  I was spurred forward by the airing of the program Search for the Lost Giants which I found, in a word, ridiculous.  I had been working on understanding the "double rows of teeth" aspect of the giants phenomenon and was planning on writing a paper on the topic.  After seeing Search for the Lost Giants, I re-considered who my target audience should be for this kind of work (see this post on the importance of archaeologists addressing "fringe" notions of prehistory) and how I might best communicate to that audience.  I decided I would be better off writing a series of blog posts than a paper or two that would be hidden behind a journal pay wall. I started with this post on "double rows of teeth" in late November of 2014, and spent some time over my break between semesters writing on a variety of other topics related to "ancient giants."  Presenting a reasoned response to the many claims about "giants" in prehistory is one of my motivations.  The Eastern Woodlands is my archaeological research home, and I'm not going to let it get hijacked by the unsupported claims put forward by many of the giant enthusiasts.

My other motivation is research-oriented.  I do not doubt for a second that tall people existed in prehistory just as they exist today.  And I don't doubt that those tall people were treated differently in prehistory just as they are today.  I grew up just down the road from Seville, Ohio, and was raised with the history/mythology of 7'9" Martin Bates and his 7'5" wife Anna Swan Bates. They couldn't get on a train without it getting written up in the papers.  I think it would be great to be able to actually study the role of exceptional stature in the prehistory of the Eastern Woodlands.  The current silly state of "research" on "giants" makes that difficult.  Getting to a place where one could actually systematically analyze the roles of real physical differences in size/stature among individuals will require, at least in part, understanding and evaluating those old accounts of "giants."

There is probably a book in all of this, but for now I'll stick with the blog posts on "giants."  I'll add them to the listing here and also post them on the Modern Mythology of Giants page on Facebook.

This is a chronological listing (most recent first):