Blog Posts
The ForagerNet3_Demography model (Version 3) is a non-spatial ABM designed to serve as a platform for exploring several aspects of hunter-gatherer demography:​​Version 3 of the ForagerNet3_Demography model (hereafter FN3D_V3) differs from version 2 (FN3D_V2; White 2014) in two ways: (1) it incorporates a model-level parameter (popMortAdjustMult) for adjusting the strength of the mortality-based feedback mechanism that constrains population size; and (2) it has two fertility schedules and two mortality schedules.

Other than being implemented in Repast Simphony rather than Repast J, this model is identical to the model was used by White (2016).
This page provides documentation and the raw code for FN3D_V3. ​The following files are available for download:Files and citation information for the model are also available on OpenABM.org.
Overview
​The FN3D_V3 model has three main levels: person, household, and system.  Inter-related person- and household-level methods represent birth, death, and the creation/dissolution of male-female pair bonds (note: the terms “pair bond” and “marriage” are used inter-changeably in this description and denote the same behavior in the model).  These methods and their inter-relationships were informed by data from ethnographic hunter-gatherers. Many parameters in the model are continuously variable, allowing the model to be used to “sweep” through a range of values and observe how differences in parameters are related to model behavior.  The dependency ratio (the ratio of consumers to producers in a household) is a key variable in many economic decisions embedded in the methods.

This model is not intended to represent all details of any particular hunter-gatherer system.  The exclusion of extraneous detail is a purposeful strategy to aid in constructing a model whose structure and behavior are understandable.  The representations in the model are generic and broadly applicable to a variety of hunter-gatherer systems.  In the terminology of Gilbert (2008), FN3D_V3 is a “middle range” model.  Middle range models “aim to describe the characteristics of a particular social phenomenon, but in a sufficiently general way that their conclusions can be applied” to many examples of the same phenomenon (Gilbert 2008:42).

FN3D_V3 was built using Repast Simphony.  Repast (Recursive Porous Agent Simulation Toolkit) is a free, open-source agent-based modeling and simulation toolkit that was created at the University of Chicago in collaboration with Argonne National Laboratory.  Documentation of Repast can be found at www.repast.sourceforge.net.

The first section of this guide provides a description of the representations of time and the entities (persons, households, social links) in the model and a very brief overview of the major groups of methods in the model (pair bond, reproduction, and mortality).  The second section describes model-level variables, parameters, and lists.  The third section describes the “rules” and the operations of the model in detail with specific reference to sections of code.
Representations in the Model
Time

Time passes in the model in the form of discrete steps, each representing one week (5200 steps representing 100 years).  A week was chosen as the fundamental unit of time to allow representation of differences in the duration of gestational periods, post partum amenorrhea, and other variables relevant to reproduction and demography.

The model maintains a “seasonal clock” that resets to 1 at the beginning of every 52-step cycle. This clock is used to increment the ages of persons and households on a yearly basis.

Each agent in the model represents an individual person.  An initial population of persons is created at the start of a model run. All subsequent persons are created through procreation.

The variables and lists that are associated with each person are summarized in Table 1.  Each person has variables to store his/her age and sex, variables to track various statuses (live/dead, household to which the person currently belongs, fertile/not fertile, etc.) and status changes (age at death, age at marriage), and various lists to store the identities of mates, persons related by descent (grandparents, parents, siblings, half-siblings, children), persons related by “kinship” (e.g., wife’s mother, wife’s father), and persons related through co-residence in a household unit.  Each person has a list to store the identities of each social link that he/she has to another person in the world. 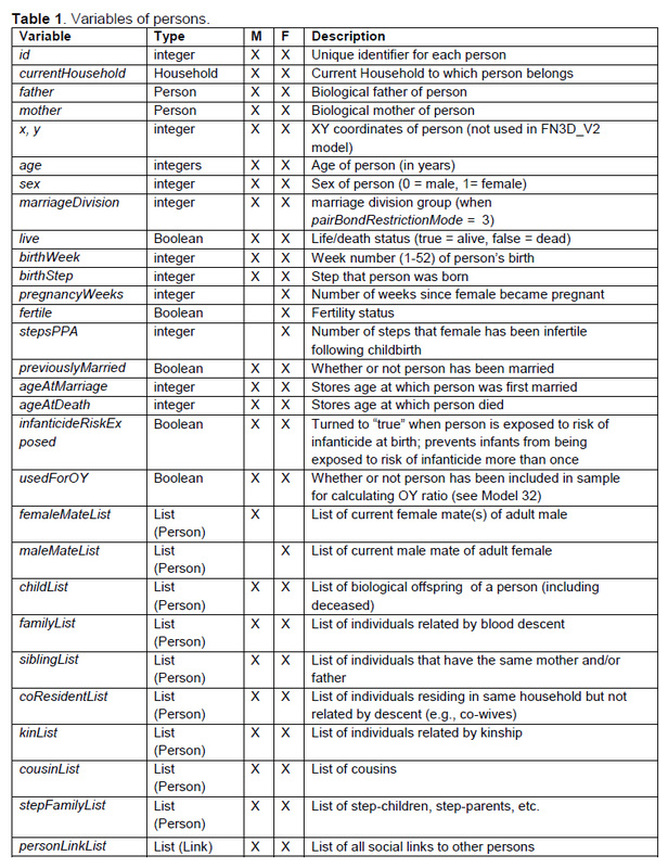 Households are co-residential groupings that are comprised mainly of persons related through affinity, descent, or marriage to a common partner (in the case of polygyny).  A new household is created through a pair bond between a male and a female.  The size and composition of a household may change by three main mechanisms: pair bonds, procreation, and mortality.  The dependency ratio of a household (ratio of the number of consumers to the number of producers, aka the CP ratio) is a key factor in probability-based, household-level decisions in all three areas.  The variables and lists associated with each household are summarized in Table 2. 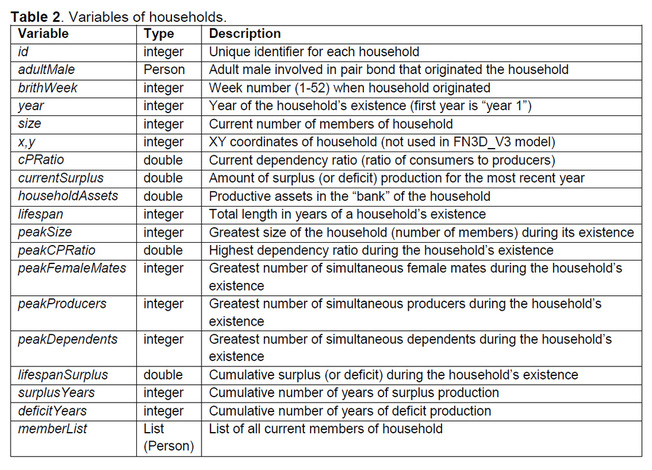 Social links are ties between pairs of living persons that define the nature of their relationship.  Links are formed based on relationships of descent (family links), co-residence in a household (co-resident links), marriage (marriage links), and kinship (kin links). Family links indicate a consanguineal (i.e., blood descent) relationship.  Kinship links are links of affinity (i.e., created through a pair bond).  Co-resident links are established between individuals that co-reside in a household but qualify for neither family nor kin status as defined here.  Variables associated with links are summarized in Table 3.   Link types and sub-types are described in Table 4. 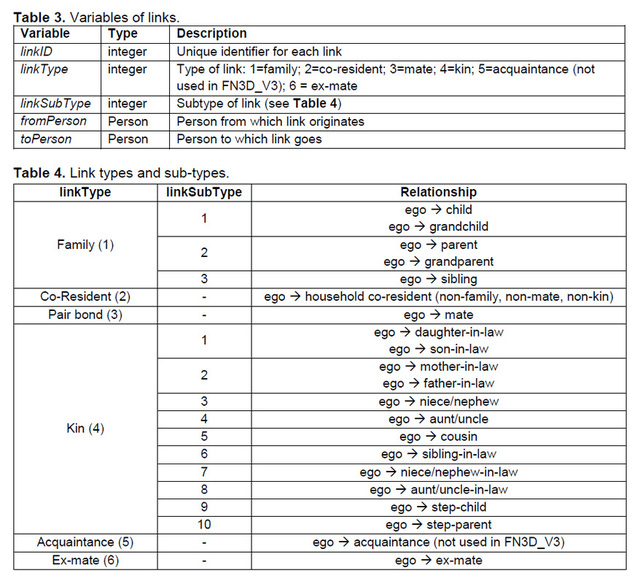 There can only be one pair of links defining the relationship between any two people, and each of the links in this pair must be of the same class.  It is impossible, for example, for the link from Person 1 to Person 2 to be a family link while the link from Person 2 to Person 1 is a kin link. Links are created or changed to the appropriate type when individuals are born, married, or change household.  A change in the nature of the relationship between two persons will trigger a change in the class of the links that connect the two persons.  Pairs of social links are dissolved as a result of the death of one of the persons.

In the model, social links are used mainly to restrict marriage between pairs of individuals.  Various kinds of marriage restrictions can be represented in the model (see below).

Creation of male-female pair bonds (i.e., “marriages”) is the mechanism of household formation and one of the mechanisms (along with mortality and reproduction) for changing the size and composition of a household. A pair bond must be present for a female to become pregnant. In the current version of the FN3D_V3 model, females may have only a single male mate while males can have multiple female mates if polygyny is permitted by the model settings.  This structural asymmetry allows the forms of pair-bonding that are most commonly found in hunter-gatherer societies.

A schematic of the pair bond methods is shown in Figure 1. The numeric designations refer to sections of model code and the narrative descriptions of those sections provided below.

The model contains provisions for enforcing marriage prohibitions based on the kind of social relationship that exists between two individuals. Instability in pair bonds is also represented. 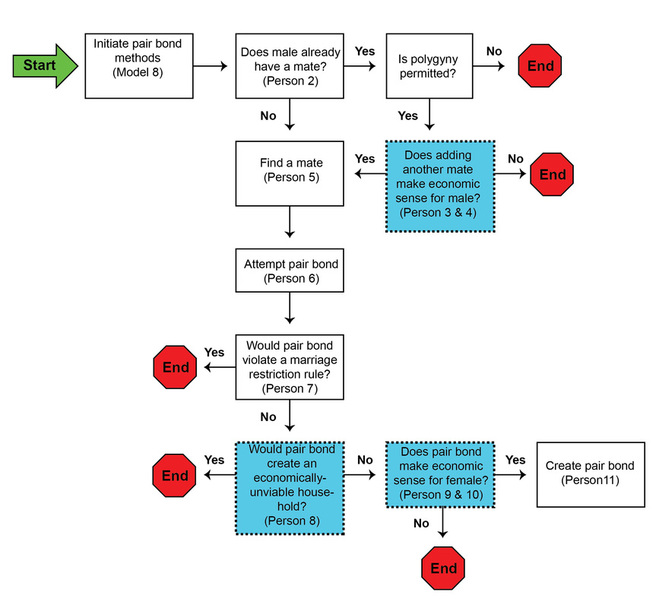 A schematic of the reproduction methods is shown in Figure 2. The numeric designations refer to sections of model code and the narrative descriptions of those sections provided below. 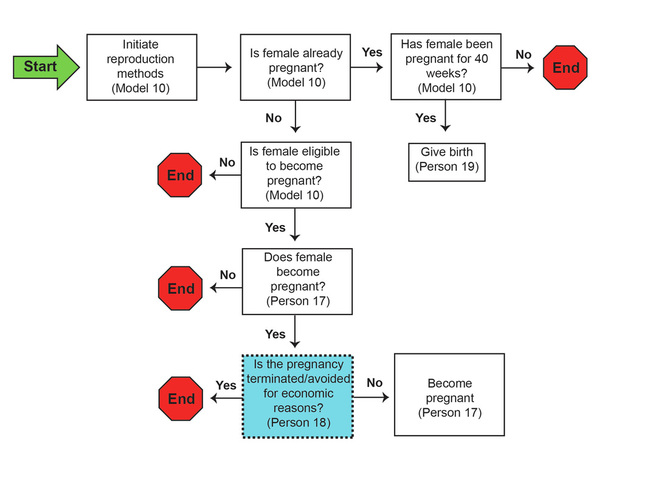 A schematic of the mortality methods is shown in Figure 3. The numeric designations refer to sections of model code and the narrative descriptions of those sections provided below.

Each person is exposed to a risk of death at each step. If a person reaches a maximum age set in the model, death is automatic.  Below this maximum age, the base probability of a person dying is determined by an age-specific mortality rate. These rates are adjustable both through a model-level parameter and through a mechanism that adjusts mortality based on population size. Newborn infants may be exposed to an additional risk of death through the economically-sensitive infanticide mechanism that is represented in the model. 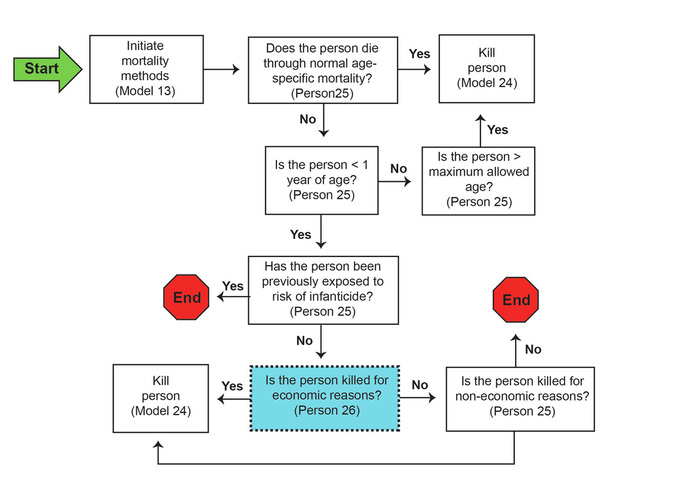 Figure 3: Schematic chart of basic components of mortality methods.
Model-Level Parameters, Variables, and Lists
Model-level parameters establish values for key aspects of the system.  The values of these parameters do not change as a result of the dynamics of the model, but can be changed or randomized as part of an experiment. Model-level parameters are described in Table 5. 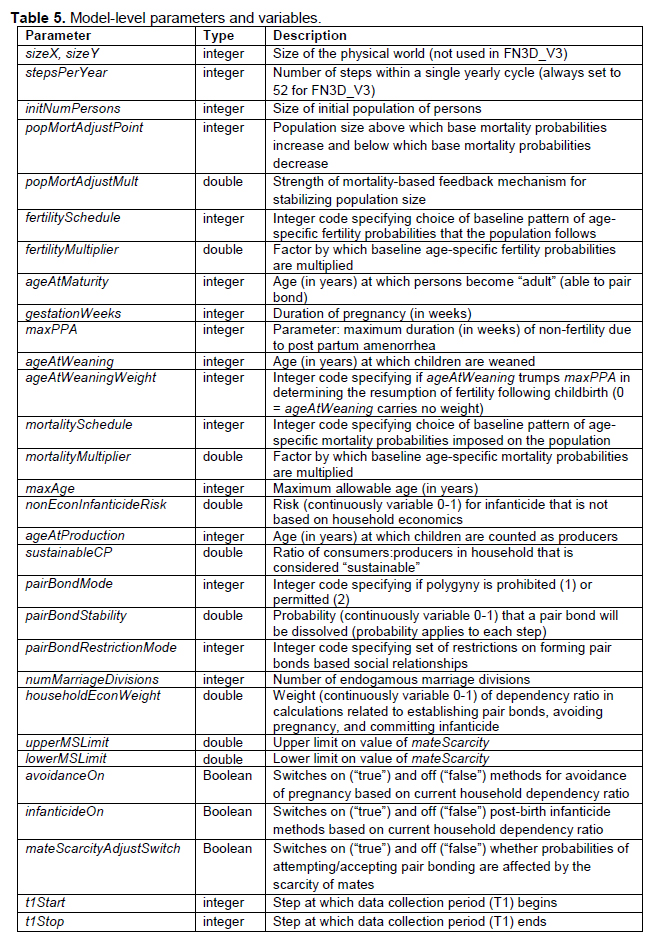 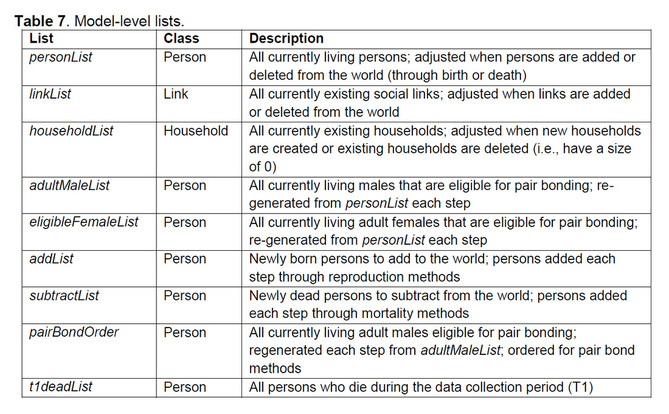 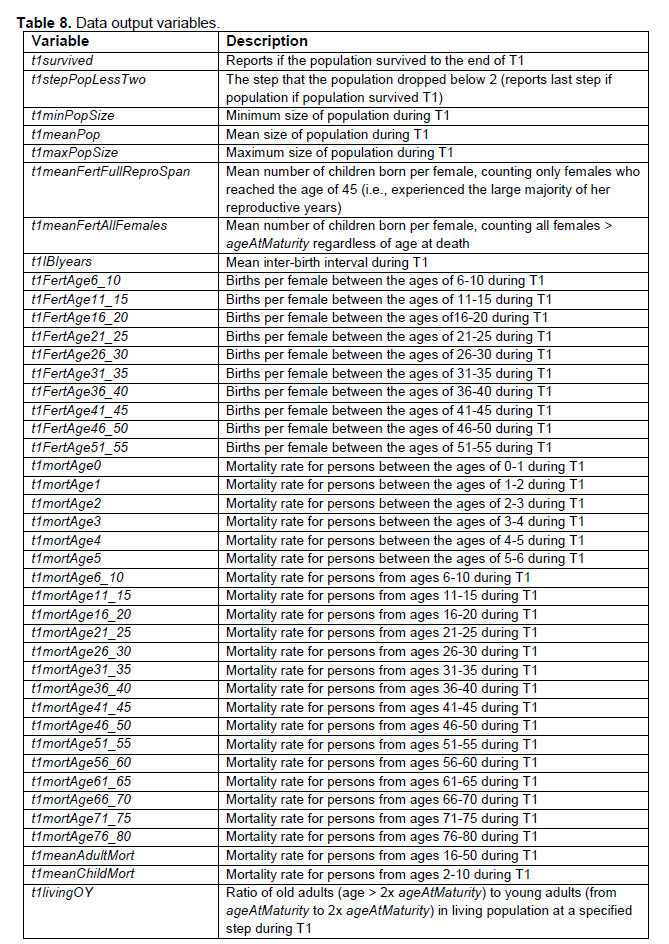 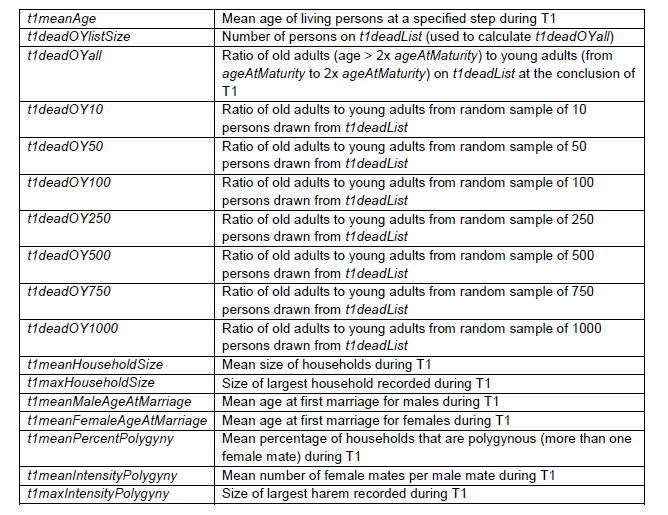 Model Structure and Methods
This section describes the methods and inter-relationships between methods that affect the behaviors and interactions of the entities in the model. Methods in the model are initiated and performed by the model or by individual persons.   Methods are inter-related through a variety of feedbacks and effects.  The major methods of the model are representations of rules governing male-female pair bonds (marriages), reproduction, and mortality.

The parenthetical numeric designations inserted in the narrative descriptions below (and in the comments in the model code) are an effort to help the reader locate relevant sections of code.  The designation “Model 12”, for example, means that the method or code being discussed is labeled “12” in the code within the Model.java file.  Numbered sections of code are placed in numerical order within each model file.  The descriptions provided here are also given in the order they are numbered, although operations in the model are not called in strictly numerical order. Model-level methods are described first, followed by person-level methods. 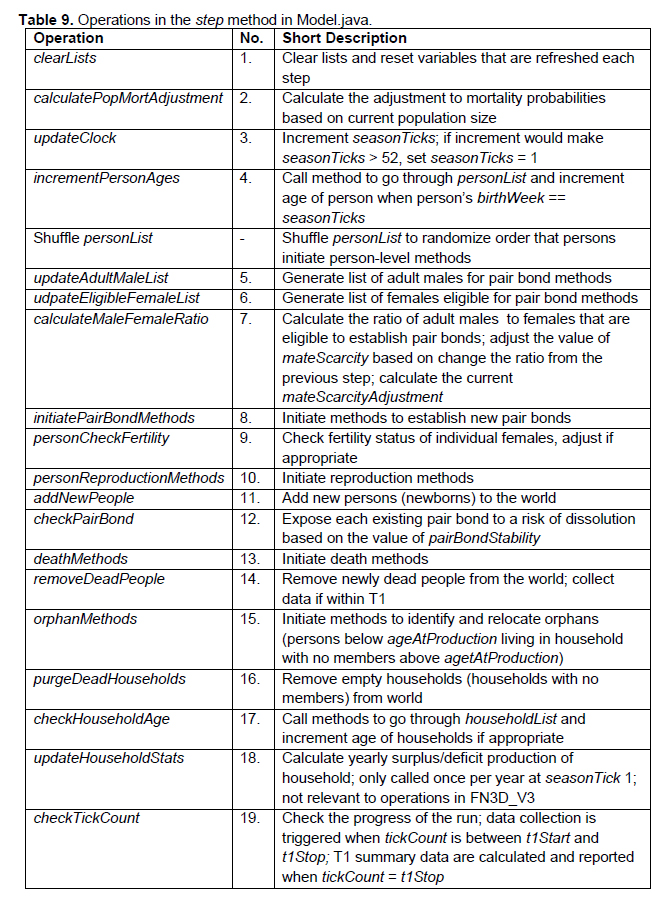 Model-Level Method
Person-Level Methods
Household-Level Methods
Model Startup
The ForagerNet3Builder.java file is called when a model run is initiated. This method creates a new instance of model, sets the space and grid, and creates the people to populate the world.  Although the model takes place in a grid, there is no spatial component to any of the methods in this version.

The createPeople method creates a population of the size specified by the parameter initNumPersons. As currently configured, this method creates a population of persons of random sex with random ages between ageAtMaturity and 20.  The model assigns random marriage divisions between 1 and the value of numMarriageDivisions and a random birthWeek between 1 and 52. Each new person is added to the personList and put into the world.
References
Gilbert, Nigel. 2008. Agent-Based Models. Quantitative Applications in the Social Sciences 153. Sage Publications, Thousand Oaks, California.

White, Andrew A. 2016. The Sensitivity of Demographic Characteristics to the Strength of the Population Stabilizing Mechanism in a Model Hunter-Gatherer System. In Uncertainty and Sensitivity Analysis in Archaeological Computational Modeling, edited by Marieka Brouwer Burg, Hans Peeters, and William Lovis, pp. 113-130. Switzerland: Springer International.